It's a WestOz thing, the annual boat race down the river in the winter when the river is full.

The race starts in the Avon River in Northam and continues over 2 days all the way down to Bayswater, a suburb of Perth on the Swan River - 124km.

But First - a Parade!
With the town full of extra people, it seems like a good idea to have a market - and bouncy castles, and musicians, and all that stuff. And fireworks - at least we hope that's why these boxes of explosives are out in the river! 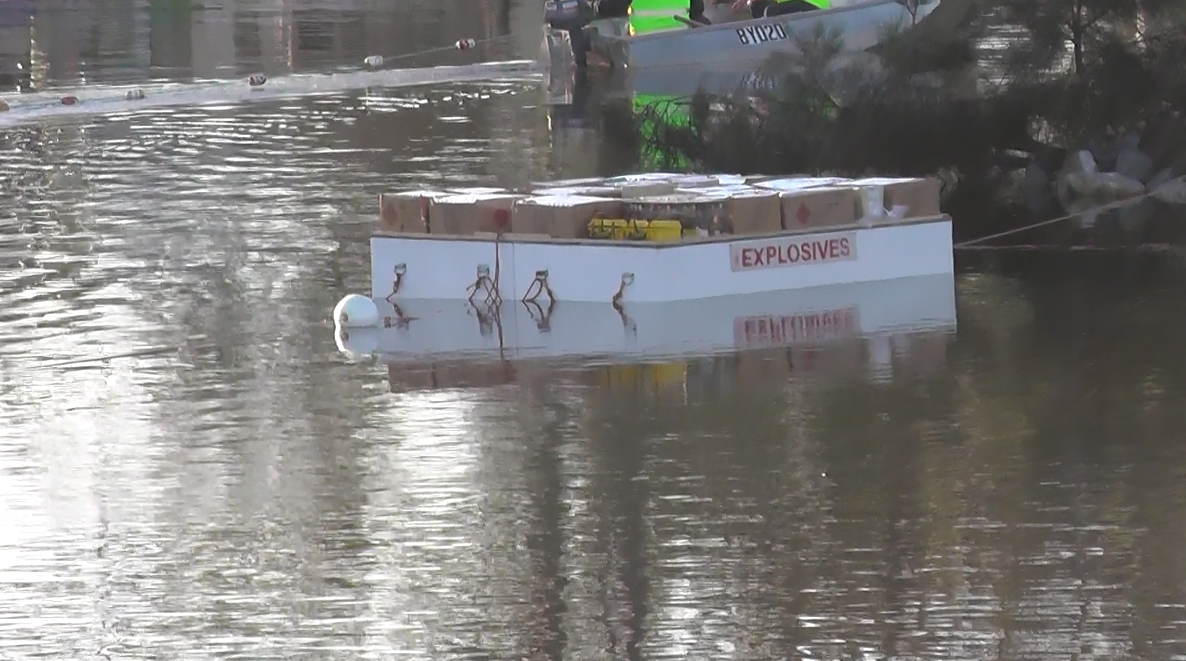 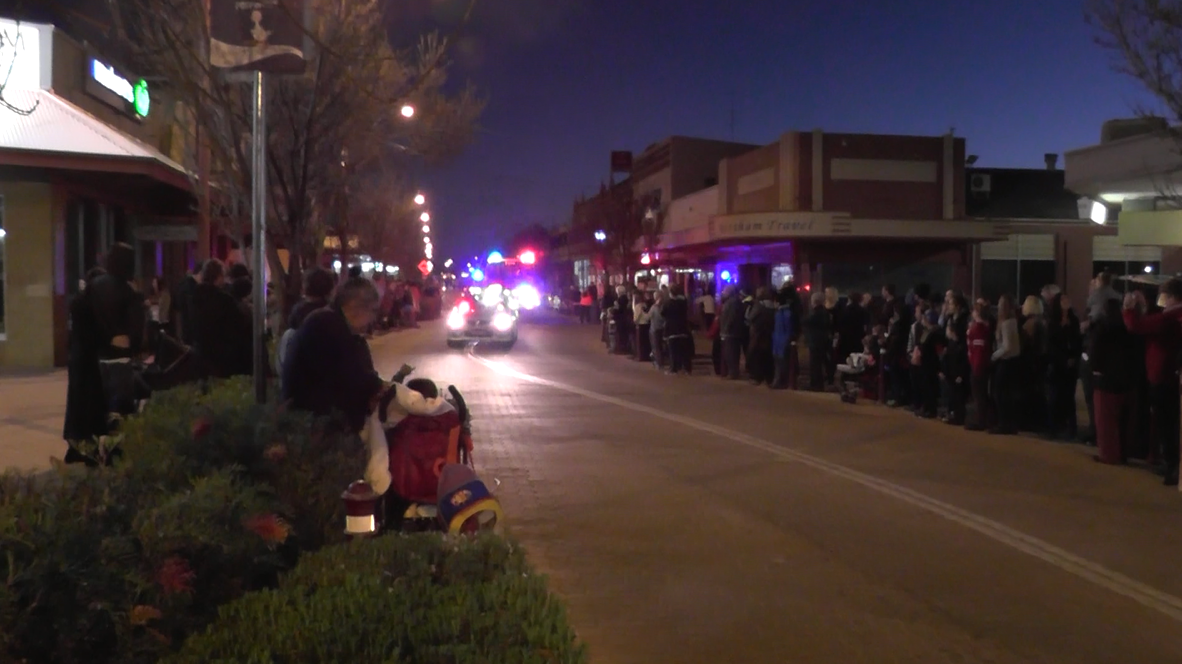 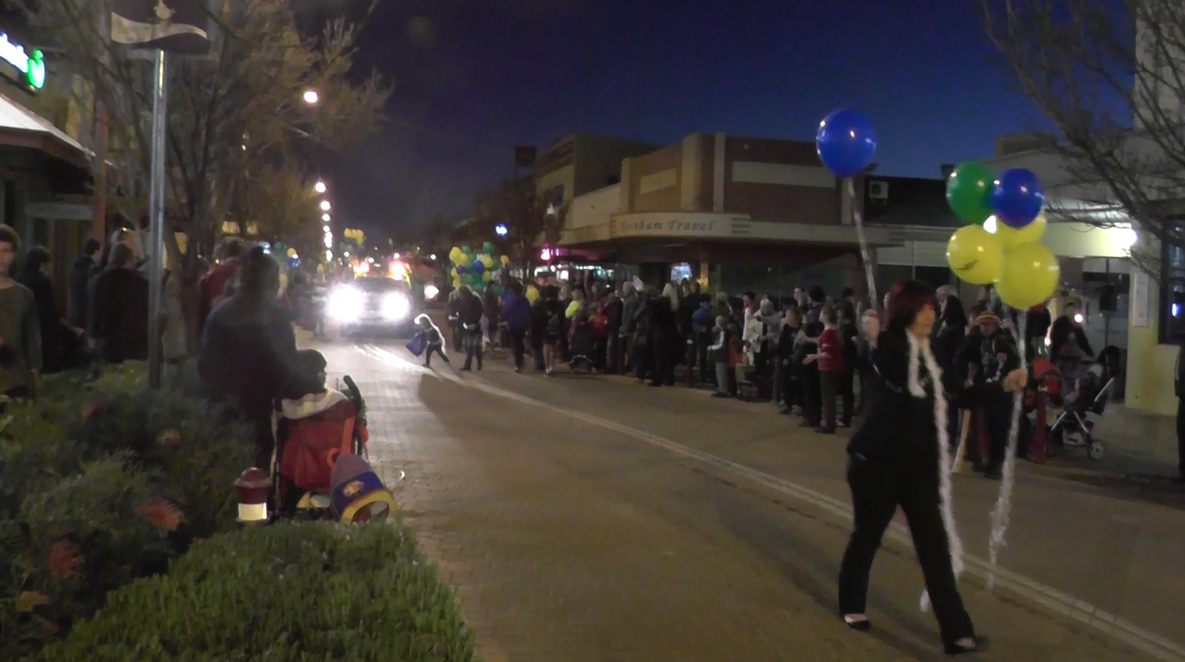 This is what the children were all waiting for - people handing out balloons and lollies! 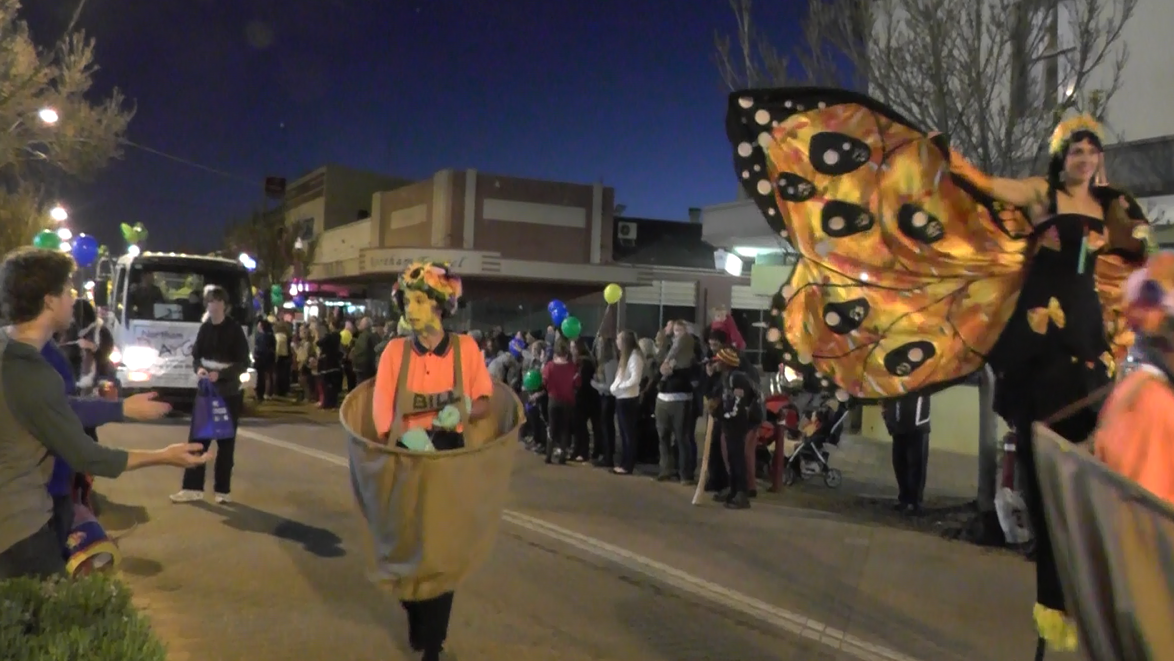 The theatre group had some interesting characters. Actually, those chaps have got lollies in their big trousers, too. 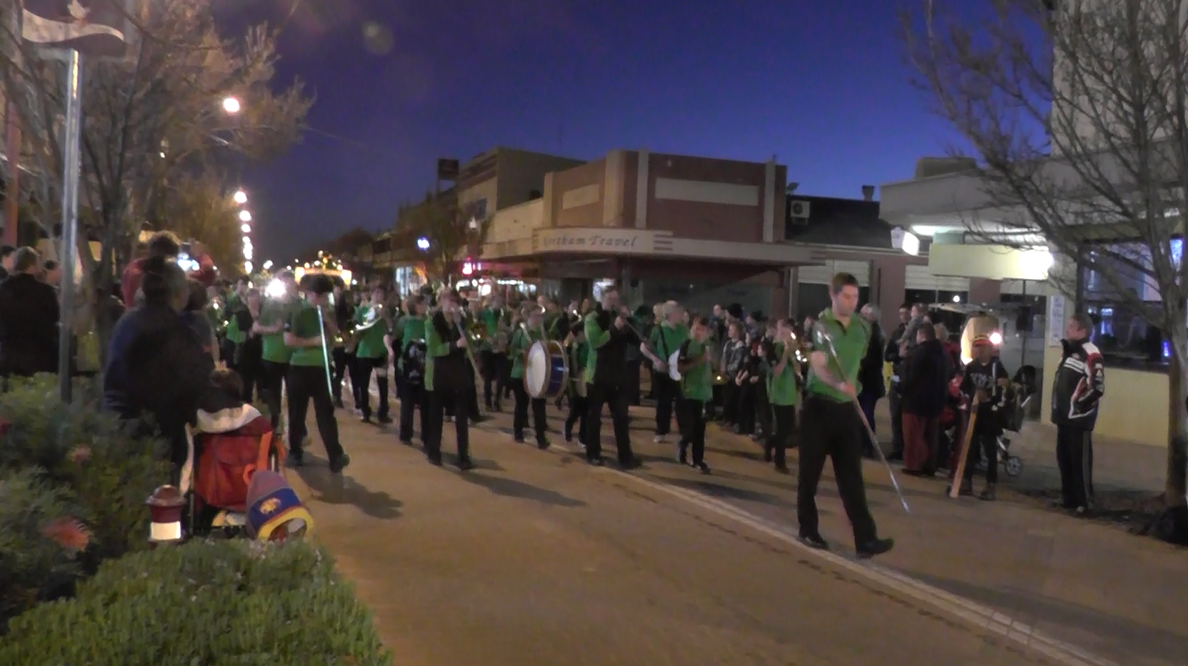 There was a breathless marching band - it's not easy to march and blow at the same time! 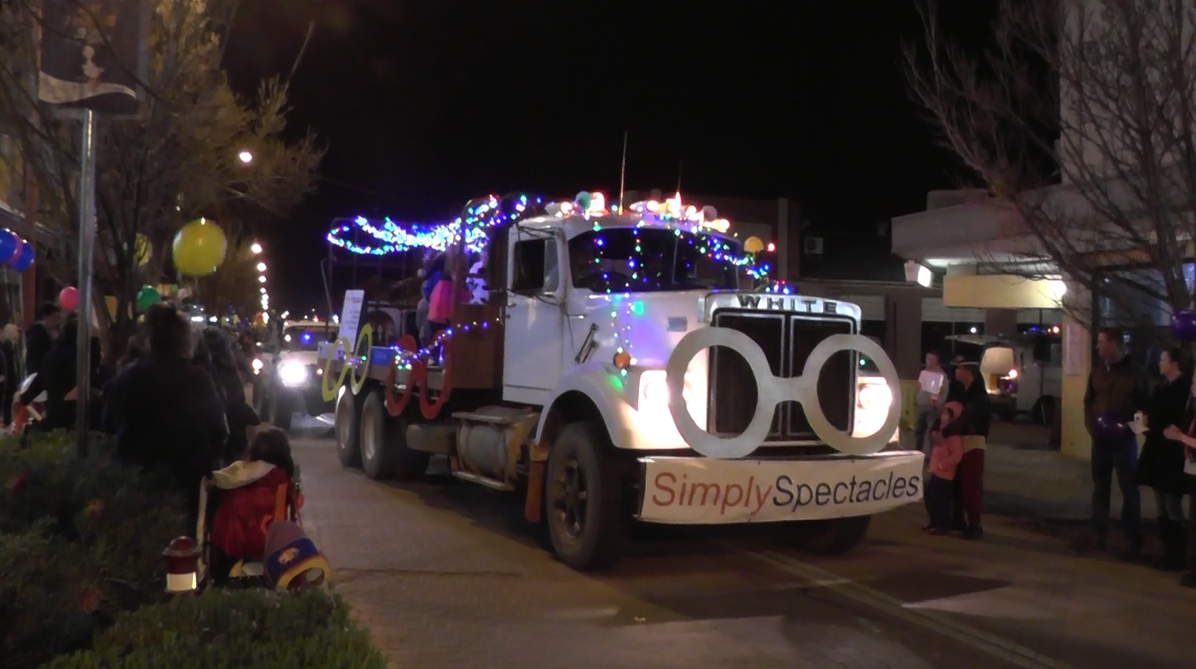 The floats, as such, were a bit disappointing, hardly decorated at all. This one was probably the best.

So around 7am (when we heard that the race was due to start) we headed down to the river, across the suspension bridge with its icy patches, and along the river bank near the weir.

Mist was rising off the river ... and it was very very cold. 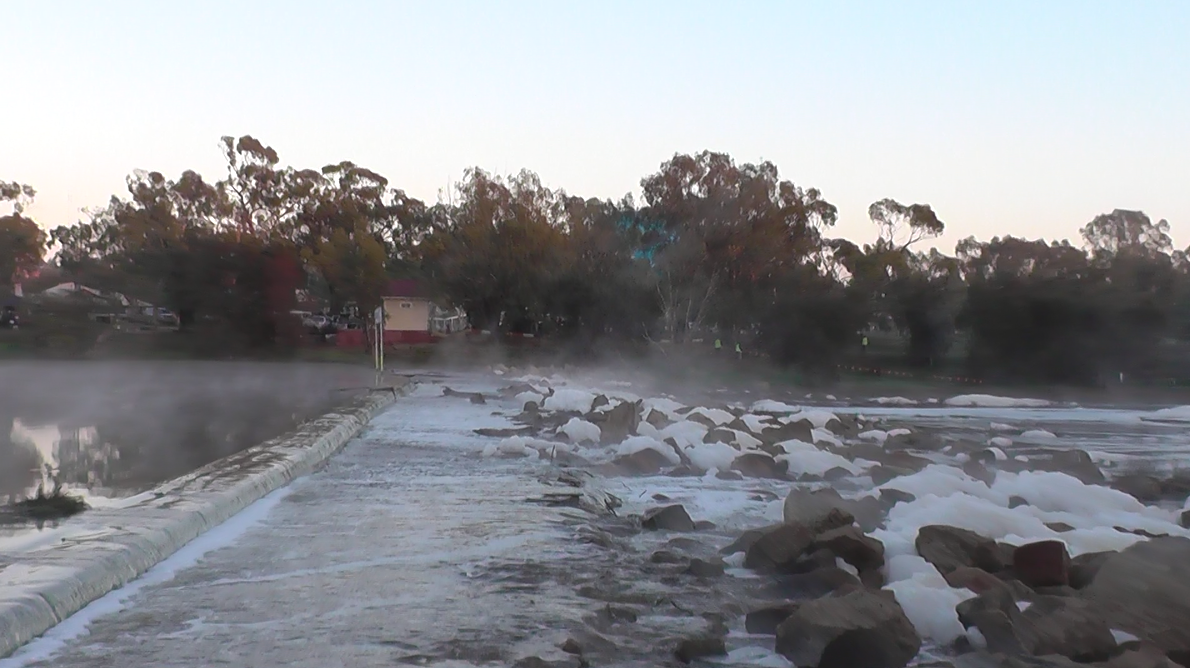 Along with the extreme cold, the river was at the highest it has been for ten years. This is the weir the boats have to go over right at the start - and that's not snow, it's foam!

We walked down and stood near the weir to watch the boats going over. We could hear the loudspeaker announcements from further up where they started by the suspension bridge. We watched as hot-air balloons rose slowly into the air. 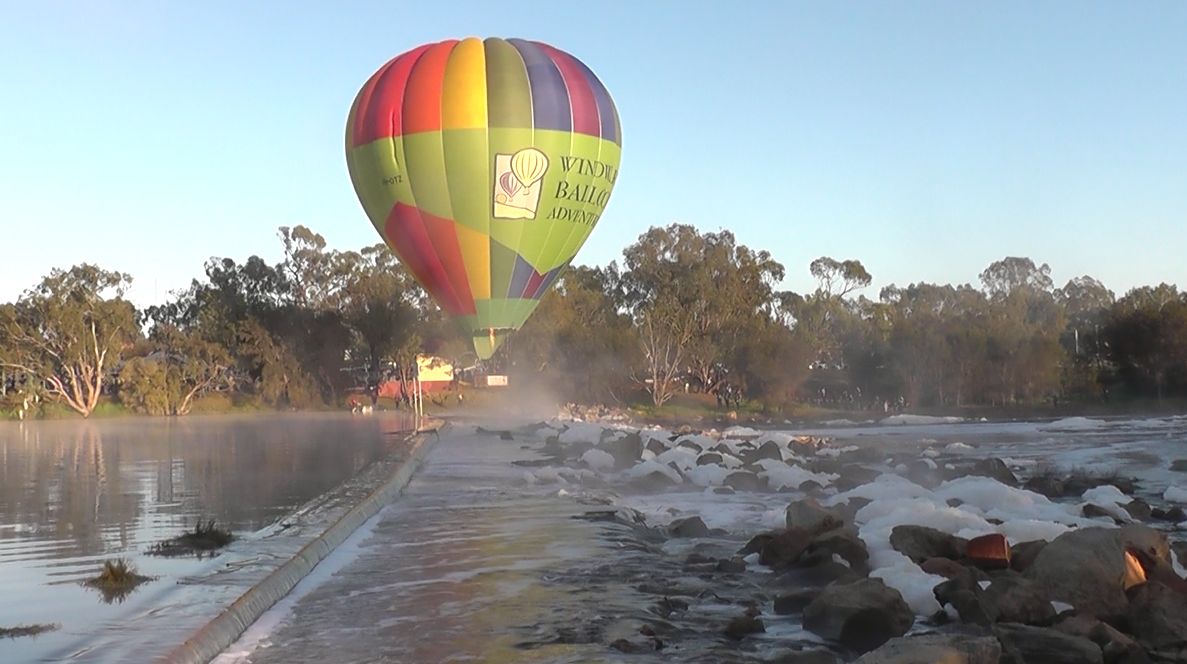 A few minutes later we were amazed to see this one come back down over the weir. With incredible control the pilot (is that what he is?) balanced his burner with short bursts of opening the flaps on the balloon itself until he was just above the foam ... all cameras were trained on the basket, waiting for these chaps to get wet! 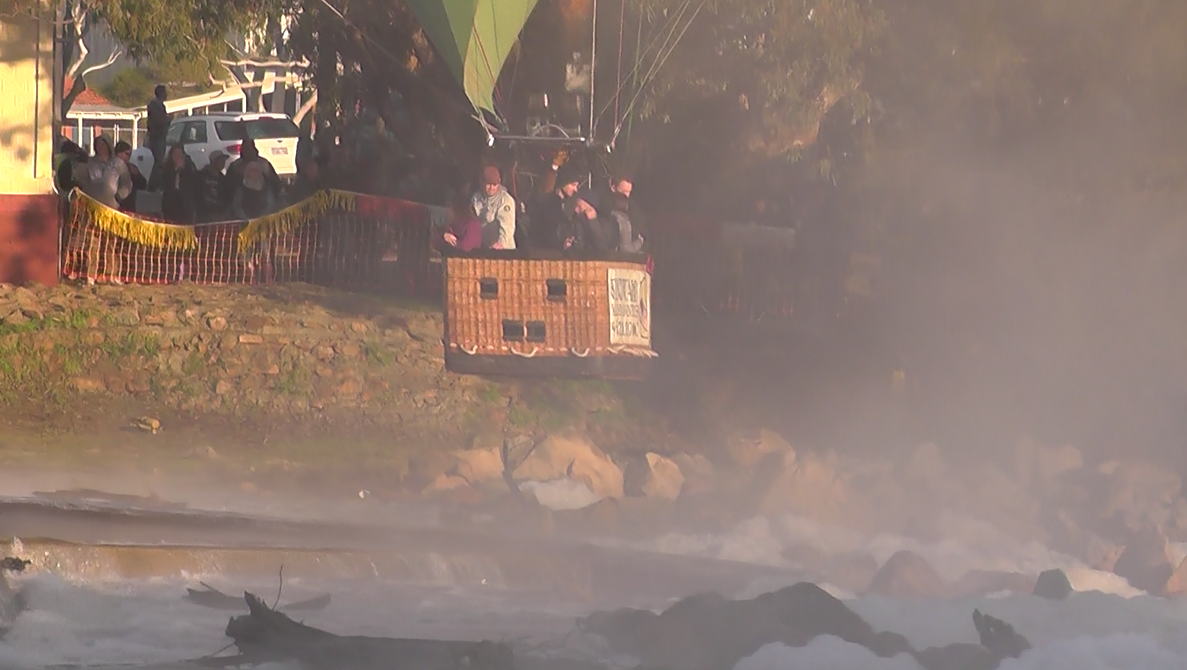 There was a bit of a delay - the start would not be until 8am we heard (not as bad as last year when thick fog delayed it for 3 hours, we were told) - so we stamped our feet and wished we had a thermos of coffee with us. 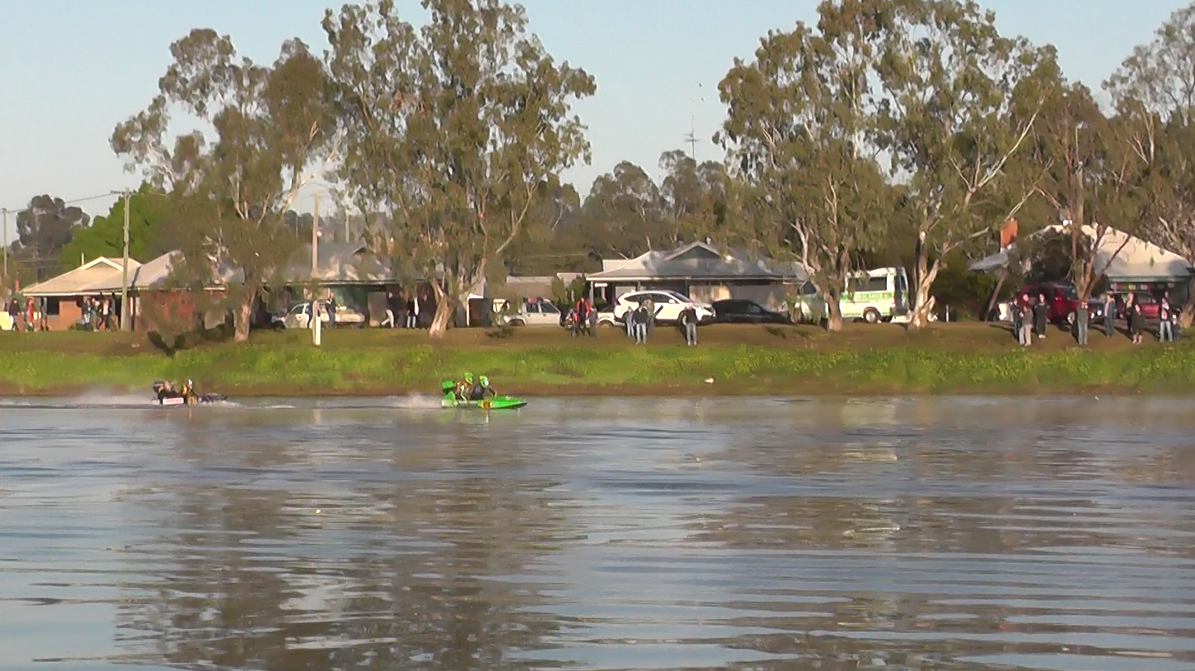 Finally the first two boats set off - they were started two at a time. They raced across the calm, clear water ... 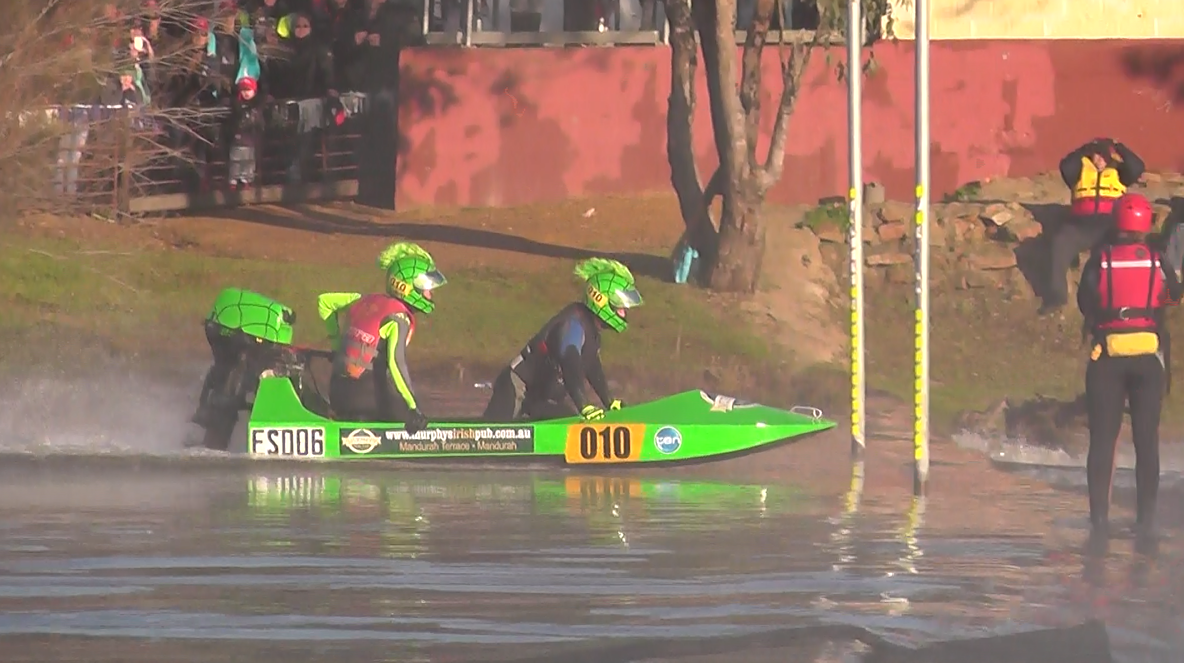 ...and over the safe part of the weir. 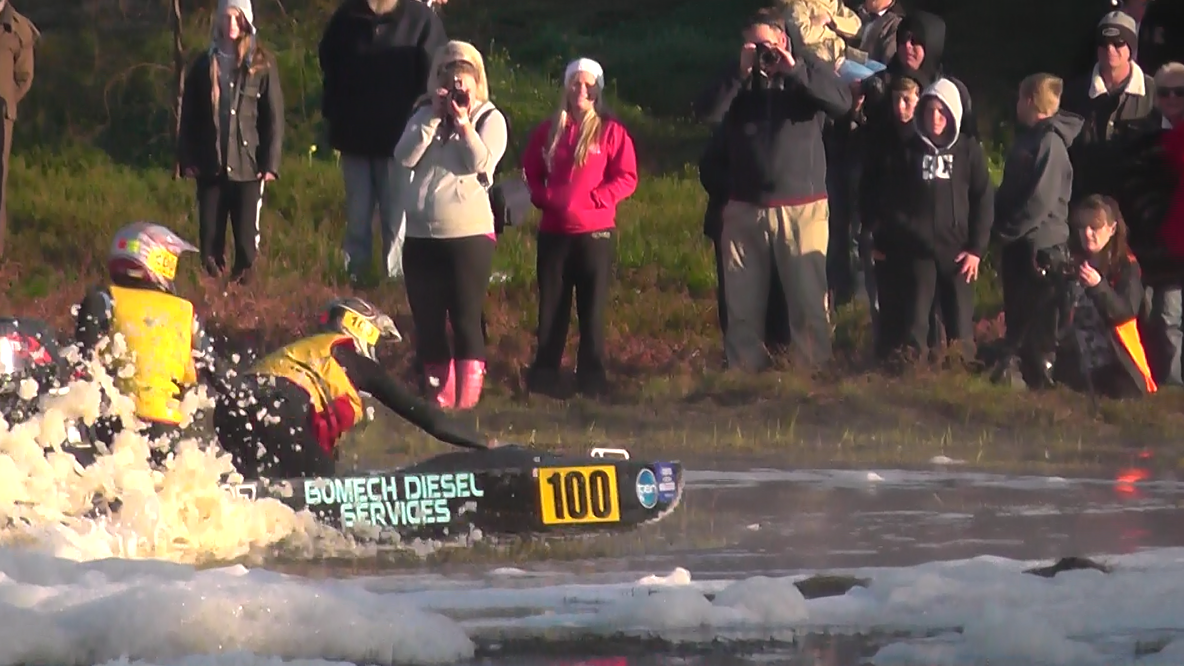 The person not holding the motor then needs to move forward and lean side to side to help guide the little boat through the rocky patches. 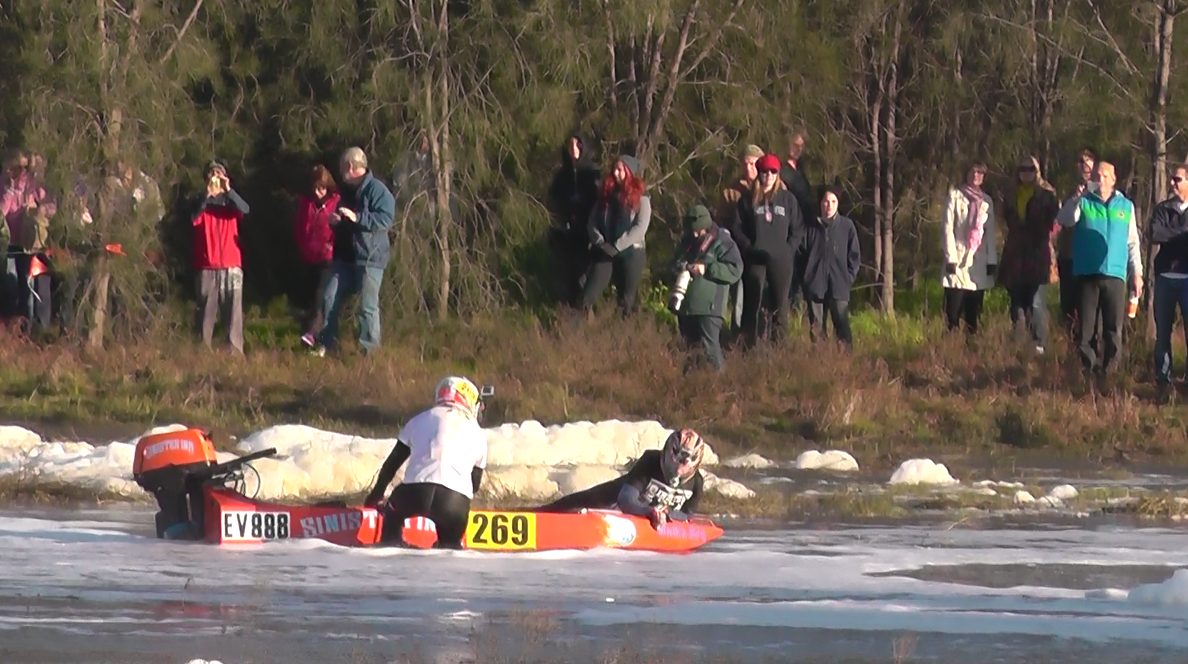 A few boats had engine trouble, and the driver had to climb out and restart. 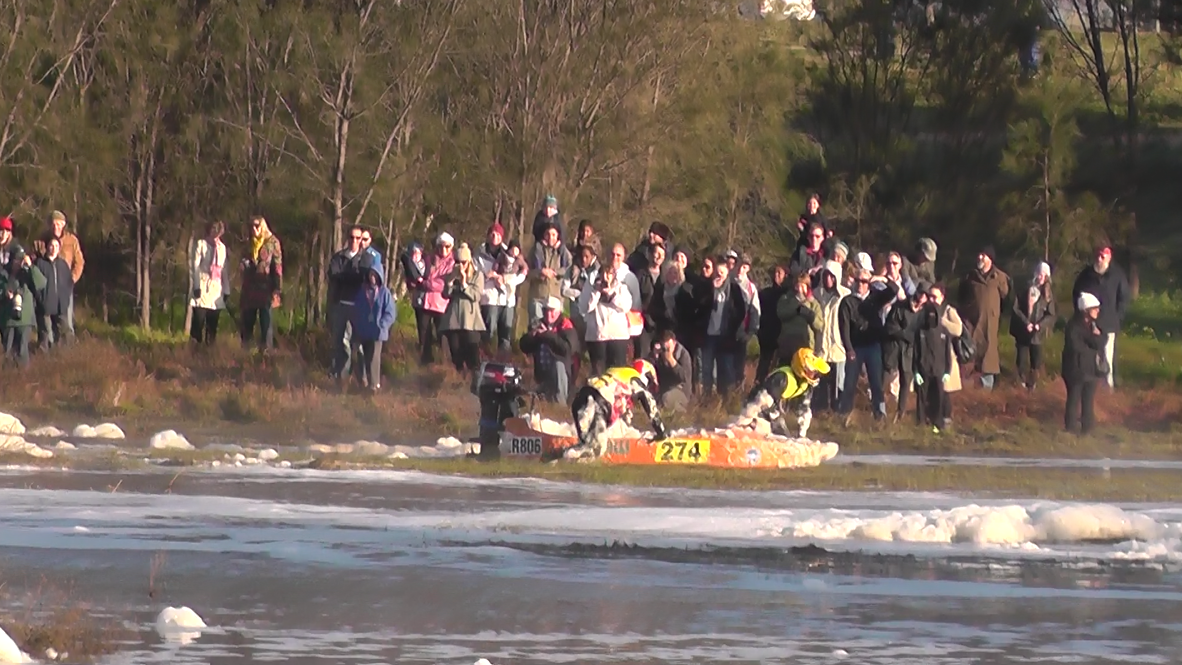 And some of them were got by the foam! A few boats capsized at this point too, and the drivers had to get into the freezing water, right the boat, and get the motor started again.

Then we headed back up to the restaurant for a coffee ($5 each - because everyone is desperate!) in time to watch the 'paddle' boats - canoes - starting. They set off in heats from a standing start, very quickly one after the other. 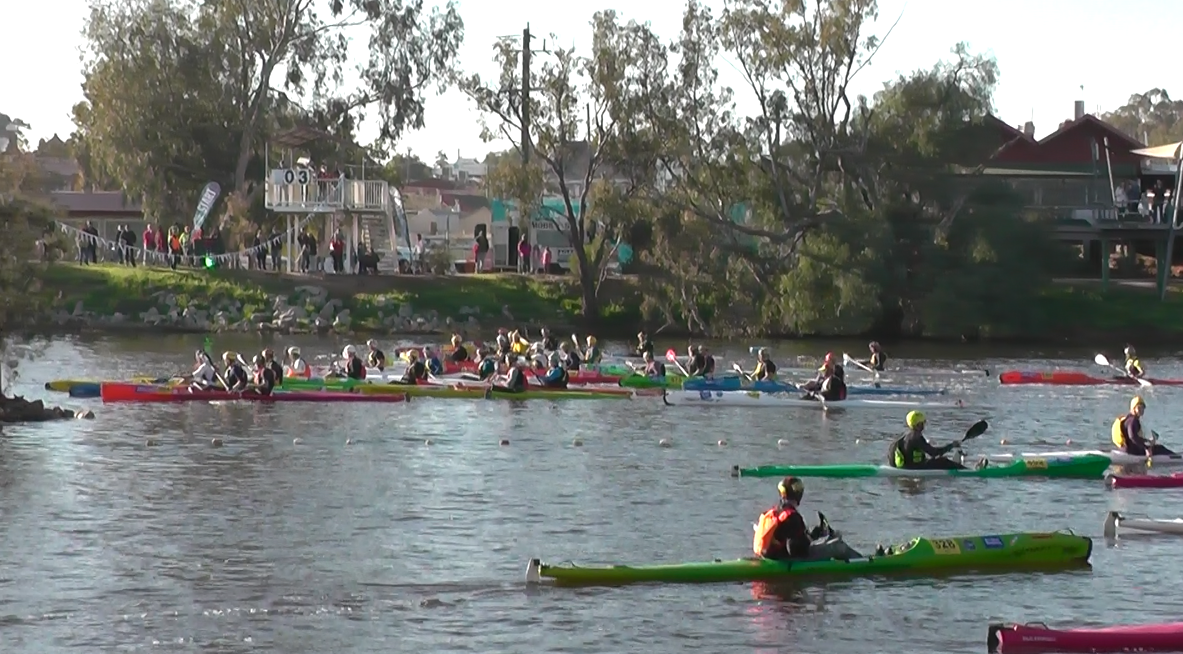 The ones over there are lining up for their start, the closer ones are waiting their turn. 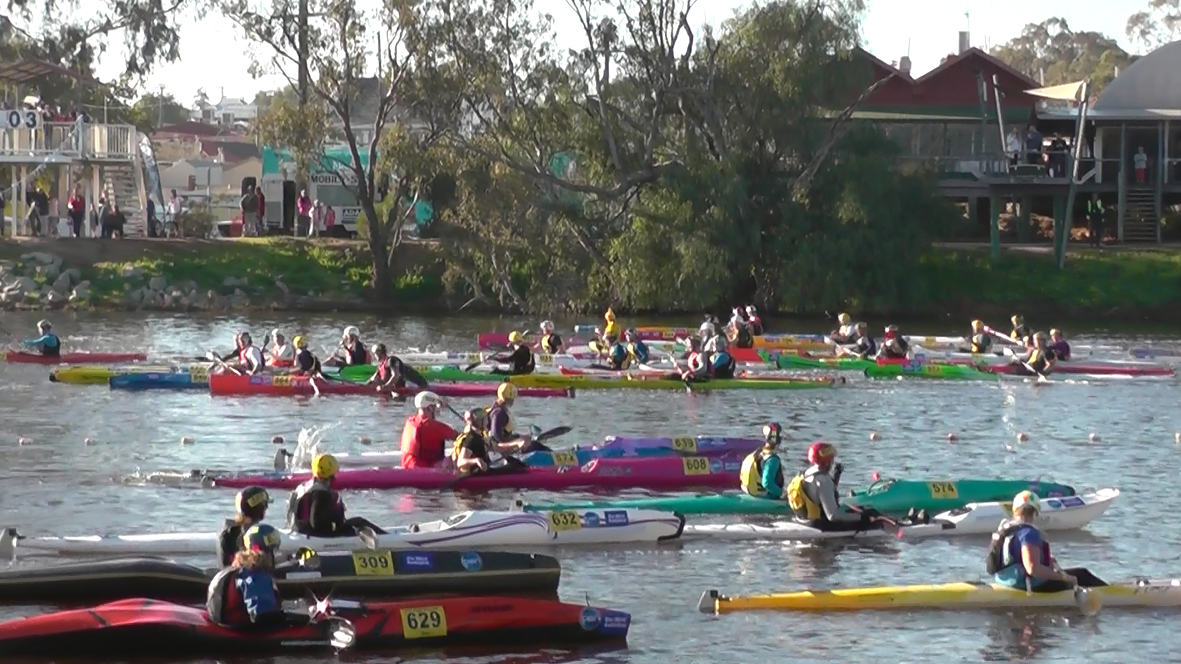 The first day involves more white water and possibly some portage (carrying the boats past difficult parts), but the second day will be harder on the paddlers with long smooth areas of paddling.

Looking forward to next year - we should have purchased a thermos by then, and we'll know the best places to stand!
Posted by Ruth at 00:31

Ruth
I am officially retired and staying put in a quiet suburb near the beach, after living in the Torres Strait in the '80s (A MERry Life), 2 years in China (Howling Pigeons of LongHu), a year in Turkey (Turklish Adventure), working in the UK (The British Job, and Porridge in Norwich), working in Saudi Arabia (Howdi Saudi), holidays around the Pacific (Not Riyadh), working in Queensland (How woomba is TOOwoomba, and Brisbane Master Class), and working in Malaysia (For we are jolly good fellows).